The drug has a high potency to ectoparasites, especialy fleas and ticks (otodectic, sarcoptes, notoedres, and demodectic), and endoparasites: nematodes, dirofilaria (effective against larvae of L3 and L4 stage). The composition of the medicine includes imidacloprid that is affecting on nervous system of ectoparasites, by interruption the transmission of nerve impulse, which result to paralysis with subsequent death. Ivermectin is a high potency remedy against larvae and mature forms of nematodes

Drug administration is external only. Split animal coat in advance, before application of the remedy onto dry and intact skin. The drug is applied near the base of the skull or between the shoulder blades. For large dogs with weight more than 20 kg, the content of pipette should be spread in 3-4 dots along the backbone, starting between shoulders and till the tail base. Do not bath an animal within 48 hours after the processing. The medicine guarantees protection during 1 - 1,5  months. In case of itch mites and demodicosis mites’ infestation, the processing is carried out 2-3 times with an interval 10 days.

This product is no longer in stock 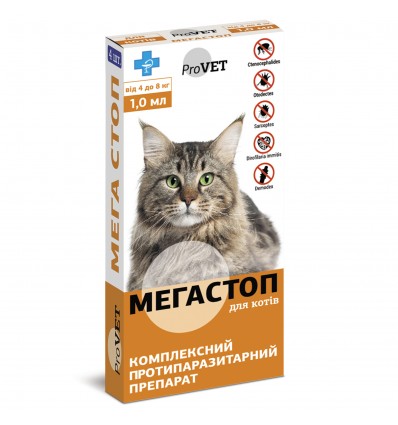 Megastop for cats less than 4 kg